Flyer: Ty Mawr Tŷ Mawr is an unusual building close to Castle Caereinion. It was discovered by two walkers who knew immediately 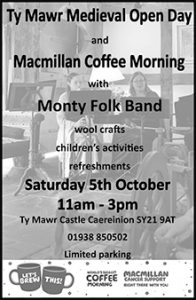 Tŷ Mawr is an unusual building close to Castle Caereinion. It was discovered by two walkers who knew immediately when they came across a dilapidated cattle shed that there was more to the old building than its current state was telling. With extensive work and research, skilled craftsmen have restored this building to something of its former glory, keeping true to the building techniques used around the original time of construction.

Tŷ Mawr was open to the public during the 1st weekend of May and celebrated with a true Medieval theme. Along with wool spinners and crafters, Monty Folk were invited to take part, and entertained visitors throughout the day with various pieces of Medieval music. The English, French and Welsh songs and melodies played included Richard Lionheart’s Ballad, Quant je voi yver retorner, Douce dame jolie, Pastourelle, Bwlch Llanberis, Can Priodas and Glwysen. The final opening for the season is on the 5th October 2019 and Monty folk have been invited back for another round of Medieval tunes, songs and merriment.